I was asked over the weekend if I believed that Dynamic Carbine is the perfect rifle class.

Neither you nor I have the time and/or money to take the perfect rifle class. I might not be the guy to detail out the perfect rifle class, but I can get the outline down rather well. Classes are always based on trying to get the best bang for the buck. Developing curriculum has a number of issues that need to be weighed, but time is always the most demanding need. There are X number of training hours and Y number of lessons. In case you were wondering Y is always larger than X by an order of magnitude. The perfect class would have boundless training hours.

The perfect rifle class wouldn't likely even involve rifles for more than a week. Students might not shoot a live round until the second month of training. If we had all the time and money available, each block of instruction would be validated with Force on Force directly after each block was finished. If we start a class with marksmanship and then pressure test it, no matter how accurate the student can shoot, they will fail at lightspeed with a 100% rate of failure. But it always starts there. Why?  Not because it is the basic building block, but because it's the easiest to teach.

What if the class started with how to use Cover and Concealment and then transitioned onto Movement? We could pressure test and validate each block as we went. We could teach people how to survive even if they weren't armed. I could spend days teaching nothing but how to use a single piece of cover. There are nuances that can be explored near infinitely. And right away, that first block of instruction makes you harder to kill. I'd love to hear the rationalization of how marksmanship makes someone harder to kill anytime they are in danger from a ranged weapon.(Hint: it only applies if you have a gun in your hands) 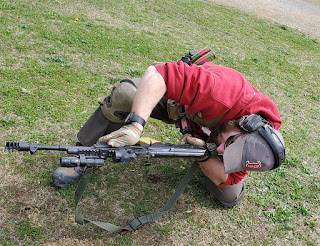 I've never made a complete list of the different types of cover but I can tell you that there are at least 6 different qualities we can measure, with dozens of answer ranges for each quality, and we multiply those to get data on one single piece of cover that is being analyzed. This is without regard to that piece of cover's orientation to any additional pieces of cover. This can not be taught in a 15-minute block of instruction. Nor even in a single training day. But it would be the absolute basic foundation to not dying while facing lethal projectiles. Newsflash, if you are dead, you will never get a chance to think about how awesome your marksmanship is, let alone use it. Why is this never taught first?

I can tell you why. It takes a lot of time. It can't be done with 20 students on a firing line. The investment is high. And that instructor still has his logistics to contend with. He has costs associated with range rental/upkeep, Insurance, business licensing, consumables, payroll, all the backend costs of running a website or storefront, and oh yeah, he'd like his business to be profitable as well. All of those things are making the tuition go up, and when we cut down the number of students because we're can't run 3 relays or have 40 students at once, that makes the individual cost climb wildly. In a perfect world, we'd validate each block with Force on Force, easily doubling the cost of running the class.

Now that the altruistic reasons are out of the way, there's another seedy reason. Lots of instructors simply don't know what to teach in that regard. They know marksmanship, so they claim it's the #1 building block. If they would just bill their class as a Marksmanship class, an enlightened student would know that's a class to take, albeit later along the path than the first step.

I've seen combat vets teach the thing that worked once for themselves. And on the surface, I am probably like everybody else, I say "aha! Validated".  But it's been validated a small number of times (often only a single time) in one specific circumstance with one very specific set of variables. Then I come back down to earth and start to dig into the details. Pressure testing anything should involve a countless number of repetitions with small changes to the variables. The reality is, combat does not offer this opportunity. Exploration of the variables needs to include failure points. Each variable needs tested to the point where there will be guaranteed failure. Doing this against an armed enemy would result in everybody being dead just trying to explore a particular technique or skill. It needs to be explored with Force On Force.

When I see schools do Force On Force, I get excited. Then I see their entire Force on Force course catalog is based on scenarios where the focus is on making decisions under stress. Sure, something a student did in their one run through the decision-making scenario might be great, or it might have luckily worked one time. With no opportunity to spar, over and over, there is little learning going on. The exercise is simply to test a student's decision making. While that is important, testing a student's ability to choose between different techniques when he hasn't tested any techniques is quite literally putting the cart before the horse.

My personal view on looking for any type of training is to find an instructor who is constantly taking quality, civilian-run courses and then continuously develops their curriculum as the pressure testing continues. For each hour of instruction, the instructor should have 100 hours of pressure testing the topic. I'm not talking 100:1 training hours, I'm talking 100:1 pressure testing hours. People learn at different rates,  so I'm not suggesting that it takes an instructor 100 hours of being a student to teach for an hour. I'm saying that the guy writing the instruction needs to have pressure tested that hour of instruction for many hours against a resisting opponent for it to have any validity at all.

If I am learning about entering a corner fed room for CQB, I don't care how many hours of training my instructor has, I don't care how many live-fire reps he has. What I want to know is how many hours he has spent developing the techniques against a resisting opponent. And development isn't "It worked once, next" It's a thorough debrief after every single run with multiple attempts and then repeated while changing a single variable. And that needs to be done for every conceivable variable. That's how a technique is validated.

So back to that perfect rifle class. Marksmanship is remarkably simple. If a student is expected to live long enough to execute it, there's a boatload of other skills and techniques that take precedence. Teaching those to students first will absolutely get the best results, but the danger is making it work logistically. It takes 10 times the output from a school to teach the non-marksmanship skills and techniques. It's easier on both the school and the student to teach a large group simple marksmanship training and then offering the more time and labor-consuming training to the smaller group that wants to go further down the path than it would to offer a class based on working cover to 5-6 students, getting 1 that will want to go further and doing that 20 consecutive times to be able to fill a marksmanship class. It just makes more sense to run those 20+ folks through an assembly line of marksmanship training and then taking the 5 that want to go further from that group and working on the more important tasks.

Given the current cost of ammunition, it seems like a great time to work on those more important skills and techniques that wouldn't be simple range masturbation of shooting groups. But for some reason, I still see 3-day/1400 round live-fire classes quickly filling up and Force on Force classes being canceled for lack of signups. I couldn't use my own data in this observation as all of my 2020 classes were sold out, both live fire and FoF. But I have spoken with a number of my peers and that was a trend. I said trend, not a hard and fast rule, calm down Nancy.

That perfect rifle class would start with the most important stuff first and constantly validate it against resisting opponents before progressing to the next topic. Instead, because of time and money, it's done backward. It's wrong, but it appears sustainable.


Dynamic Carbine? I'll sneak in as many of those important skills and techniques as I can while still getting some marksmanship in. Then I invite all of my students at the conclusion to attend Study Groups where we hammer that important stuff. The ones who take me up on that offer invariably become harder to kill than the average student.
Share