Armed at Home, or Home Arsenal?

I was having a discussion with some friends about the merits of always carrying a gun. Everywhere. All the time. No Metal Detector = carrying a gun. And I was hit with the following question….”What about at home?” At first, I was confused, do people have metal detectors in their houses? But the more we talked the more I realized that some people take their guns off when they get home. “Whew! Thankfully that is over” was the mindset I was dealing with. I can't say that is a mindset that is beneficial to survival at all. I asked them this question, and I pose it to you as well; where do 100% of home invasions take place? Yes, you are correct, the home.As we discussed contingency plans for a home invasion there were three general schools of thought.
A: I’m home and I’m safe.

B: I have guns all over my house, there's always one within reach.
C: I carry a gun, at home.“A” is a simple fallacy. If you believe this, you are wrong. I can't stress this enough. Outside of the “home invasion” scenario, which should be plenty of reason to be armed, 29% of all violent crime is performed by a household member. (US DOJ stats)
“B” certainly has some merit, but I find that most people seem to think having a handgun in their biometric safe in the nightstand counts as having a gun within reach. Which is partially true when one is in bed.
“C” is a great choice, but like “B”  it usually isn't as true as people believe it is. Going to the bathroom at 0300 is a time when most people don't grab their smokewagon on the way out of their bedroom.There's only so much I can do from behind a keyboard to help, but maybe explaining what I do will spark some thought on things you can do to maintain being armed at home. It might not be the answer for everybody, but I found what works for me.My first line is to carry my gun at home. Thanks to the awesome guys at Stevens Concealment and Yeti Tac, my daily carry gear is comfortable and easy to carry all day long. If anybody reading this struggles with finding a suitable holster give those guys a look. Green Force Tactical and Galco make some fine choices as well.  The upside of carrying your gun at the house is that I don’t need to plan further. If I am in the basement doing laundry, I have a gun handy. If I walk out front to check the mail, I have a gun on me. Mowing the grass? Already have a gun on me. It’s easy to see that we need to exert no extra effort, regardless of what is going on at the house to be armed. I have talked to many folks out in town that normally are armed that admit that after de-gunning when they went inside had neglected to re-arm before they ran to pick up some milk, or bacon, or beer. I don't want that to be me, I didn’t want it to be them, and I don’t want it to be you. The simplest way to assure you are armed is to remain that way all day.I can hear what you are thinking. You aren’t going to sleep wearing your gun, or shower with it. I get it. That's where we supplement our “Armed at Home” with the “Home Arsenal.” Like most people, I sleep in something other than what I wore all day. Shorts and a t-shirt are not the most conducive to carrying the same way I do normally. What I prefer to do is keep my carry gun handy beside the bed. But the devil is in the details. Instead of placing my pistol on the nightstand or one of those bedside holsters, I take off my pants and put them on the floor beside the bed. Very similar to how a fireman has his turnout gear staged. 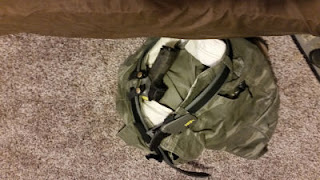 I was once awoken to the sound of a car accident outside. There was screeching, the crashing. I immediately put my pants on and had a pistol, spare mag, flashlight, fixed and folding blade knives, car keys, and most importantly medical gear. The only thing missing from my EDC was my phone since it had to charge at some point. I did grab it on the way out. I find this much better than dumping my pockets and then scrambling to get it all in an emergency. In the morning I will empty the pants to put the stuff in the new pants I’ll be wearing that day. If there happens to be a “noise in the house” and I just want the gun/light it’s no more difficult to get it from my holster on the floor than it is in a drawer beside my bed. My first course of action, in this case, is to grab the rifle from beside my bed. There is a suppressed SBR with a light and constant-on red dot between my bed and my nightstand. With a redi-mag, I have 60 rather quiet rifle rounds at my disposal with a light attached. Far superior to a pistol in every aspect.
That leaves me with one glaring omission, the bathroom. Normally, if we are armed our gun will be with us in there. Even showering, if we take our clothes off in the bathroom, our pistol will likely be in its holster on the floor somewhere. “But Garry, I change in my bedroom, not the bathroom” OK, that’s fine. This next idea works for that. It also works for those middle-of-the-night trips to the head. Personally, I’m trying to find the bathroom without turning on any lights or stepping on a lego. I always ignore both the rifle and the holstered pistol. So my solution to that was a shotgun in the bathroom. 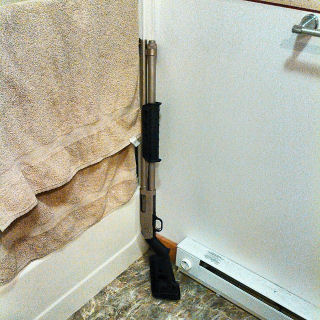 Brian at Tacticool Guns and Gear hooked me up with a Mossberg 590 Mariner. I chose this model in particular. The 590 and the Remington 870 are reliable workhorses. I prefer the 590 to the 870. The Mariner is designed to be exposed to moisture. There is no exposed carbon steel. All nickel plated or replaced by polymer parts. I felt confident that in a room that is constantly humid, the gun would function normally. It has been doing this for a couple years with no issue. This is the same shotgun I train with, so it gets frequent checks and tests to see if it holds up. I used to have some roommates that kept an S&W J-frame in the shower. The gun didn’t seem to be affected by the constant wetness, but the ammo was frequently a dud. They now keep an AK in the bathroom. While it does show some signs of surface rust, true to an AK, it keeps running.These are the things that I do to keep my home better prepared. They may not work for everybody, but maybe we can get thinking about the things that will work for us at home. Not only should you approach how to be armed at home you should get some training on how to effectively do so. Get your family on board with your emergency plan and practice it. You will likely have mere moments to put your plan into action while help is many minutes away.
Share